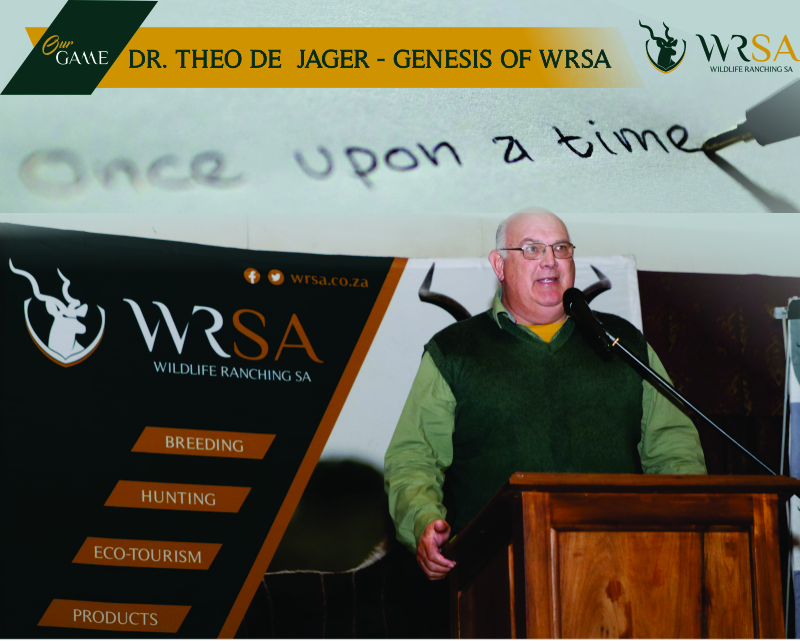 THE GENESIS OF WRSA – FROM YESTERYEAR TO 2022

The Genesis of WRSA – From yesteryear to 2022

Modimolle, 21 May 2022 – WRSA was honoured to have one of the ground-breaking members, Dr Theo de Jager, as our keynote speaker at this year’s AGM, and he shared memories of those very first days with the attendees.

He recalled: “There came a time, a mere two decades ago, when in this industry, the game ranch industry, wildlife farmers started to talk about the future of the industry. It was a time when there was much less international, and even national, pressure on the hunting industry which is a very important partner of the wildlife ranchers. It was a time in which even the national policies and the legislation around this industry was still in its baby shoes.

But wildlife ranchers realised that it does not matter that much how valid your opinion is as an individual, how logical your argument is. What really matters is the number of people you represent. It becomes a “weight game”; what is the influence you sway amongst the practitioners in the industry. If you have the voice of the industry, you need the place around the table. You need to be around to speak when policymakers meet. If you do not have a place around the table, you might be on the menu. It is as simple as that.

Today, WRSA can claim to be the biggest player on this field in the world. No one represents more game farmers than you do. Not in South Africa, not elsewhere in Africa, and at this stage not in the world. You can be proud of the fact that you represent the most competitive industry in agriculture today. There is no wildlife ranching structure in the world which is more competitive than you are. Even though you are a relatively young structure. And I want to attribute this to two factors. First of all because there was a day, around 16 years ago if I remember well and I recognize many of the faces here were there too, that was around 2005, when all these fractured structures convened on a farm not that far from here, to say: shouldn’t we stand under one umbrella, shouldn’t we look at the differences between the structures, differences in approach, differences in constituency, differences in place of origin. Shouldn’t we try to consolidate what we have as assets in terms of members and policies. Shouldn’t we put that in one basket and try to approach the policymakers a little stronger?

And at that meeting, issues were identified on which we should develop policy. I remember some of the issues which were taken (up) that day, has not been sorted out even until today. And it might take another decade or two to get there, but at least the structure was formed, WRSA, and it was possible to engage with the policymakers.”

This foresight paved the way for the WRSA of today, a voluntary, non-profit organisation representing the interests of wildlife ranchers in South Africa provincially, nationally, and internationally.

“WRSA and its members play an integral role in the wildlife economy and advocate for the responsible and sustainable use of renewable natural resources. The expansion of wildlife habitat, conservation of species and protection of biodiversity outside of protected areas, is our game.”

The first chairman of WRSA, Mr. Borrie Erasmus, handed Dr. de Jager the certificate recognising, and thanking, him as a founding Member of WRSA. 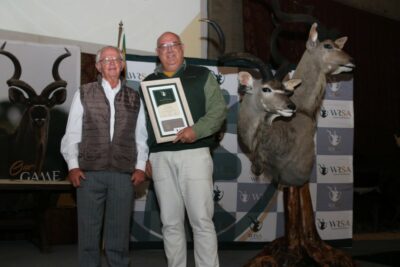 WRSA honours the pioneers of the wildlife industry

It is an honour to recognise the fortitude, loyalty, and continued support to the industry of the long-standing members:

Visit our Gallery for photos of the certificate ceremony at the 2022 AGM.