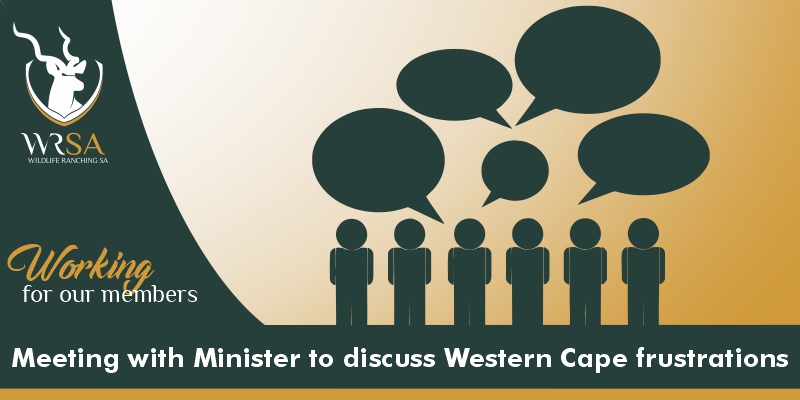 Minister Bredell emphasized that local government’s primary concern is poverty, job creation and the economy. Biodiversity is a critically important responsibility of the Western Cape local government as biodiversity supports tourism – a potent source of income for the province. Game Ranchers must help ensure that these primary concerns are addressed, and that biodiversity is secured and protected within the province.

WRSA chairman Gerhard Heyneke highlighted the sizeable investment game ranchers make into their businesses, and the importance of operational certainty to ensure future sustainability.  An important factor in the future of a sustainable wildlife industry is that game ranching cannot function under the protected areas legislation. As an Agro Sustainable biodiversity economic industry, game ranching falls under biodiversity but as an economic concern. Game ranching is a business that seeks to extract income from their game and their products to support themselves. It is an important consideration that if a game rancher cannot create income from their products, there is no way that they can continue to do what they are doing.

The discussion was centred around the success of the Sustainable Wildlife Economies Project (SWEP) which surveyed over 158 farms in the Eastern Cape and Limpopo. SWEP intends to expand its research into other provinces throughout the country, the data gathered to date is providing invaluable insight into the wildlife economy. WRSA represents one of the largest wildlife industries in the world having increased numbers of wildlife from 500,000 to currently around 20 million. This continues to be the greatest success story regarding biodiversity, habitat, species development and conservation. However, game ranching should not be limited to only certain provinces and there is enormous potential in the Western Cape to expand. The uncertain conditions of the industry in the Western Cape now may force ranchers to revert to crop and/or livestock farming which could affect the potential growth of the industry, and, due to the considerable expense of building a positive income game ranch, may thwart any future developments.

Current sentiments in the game ranching community are that the Western Cape is not a friendly environment in which to do business. We need to overcome this challenge by establishing a set of rules for the biodiversity framework in the province within which we can determine a clear understanding to comply to the applicable legislation.

Nico Lerm and Danie van Jaarsveld highlighted administrative and permitting issues – such as the delays in issuing and renewal CoAE’s (Certificate of Adequate Enclosure) and hunting permits – experienced with Cape Nature and provided feedback regarding fellow game ranchers frustrations. Ms Coral Birss the Executive Director: Biodiversity Capabilities requested detailed incidents of permitting delays and irregularities to investigate and determine the underlying issue. Nico expressed his gratitude towards Ms Birss for her continued support and willingness to assist. The Minister also requested cooperation from both sides to build a strong, healthy relationship based on mutual respect.

Minister Bredell suggested the revitalisation of the wildlife forum to allow for continued engagement with the industry. Previous attempts at establishing a wildlife forum were hamstrung by including participants with too wide an interest field for the specific discussion surrounding the wellbeing and sustainability of game ranching. In the discussion, both parties agreed that when creating a new game and wildlife forum, all participating parties must be on the same page to have constructive debates. A dedicated forum with the intent to bring the legislation and rules to within a legislative framework may be the best course going forward.

The call has been to include the greater safari industry into such a discussion forum. This includes among others taxidermy, veterinary services, and the hunting organisations. These groups, along with game ranchers, form the foundational sector of the wildlife industry in South Africa and all of them have a vested interest in the sustainable utilisation of the products of the industry. Richard York indicated that WRSA as an organisation has changed over the last 16 months and is now able to bring to the table not only a significantly larger and more organised structure but can also table its new online system. This system can address many of the hurdles and frustrations experienced by the department. Most of these are administrative in nature which the new system aims to address. This development will enable WRSA to offer, and be a part of, solutions.

One such solution taking shape as WRSA has been approached by the Veterinary Services department to investigate means of privatising the movement of buffalo. There have been several reports of ranchers in the Western Cape who cannot bleed or unload their buffalo because of restrictions on departmental budgets and resources, meaning there are no veterinary personal available unless ranchers cover the expense of a state service. Through the development and support of the WRSA online system we would be able to create the solutions that address these constraints and ensure the safety and wellbeing of the animals while enabling ranching to continue efficiently.

Minister Bredell closed the meeting by agreeing to the proposal of establishing a game-focussed forum where the industry can be discussed with urgency. Gerhard Heyneke expressed his gratitude towards the minister and Cape Nature for allowing such frank and candid conversation and for the willingness of the Western Cape to establish a wildlife forum that intends addressing many of the concerns wildlife ranchers have in the province.