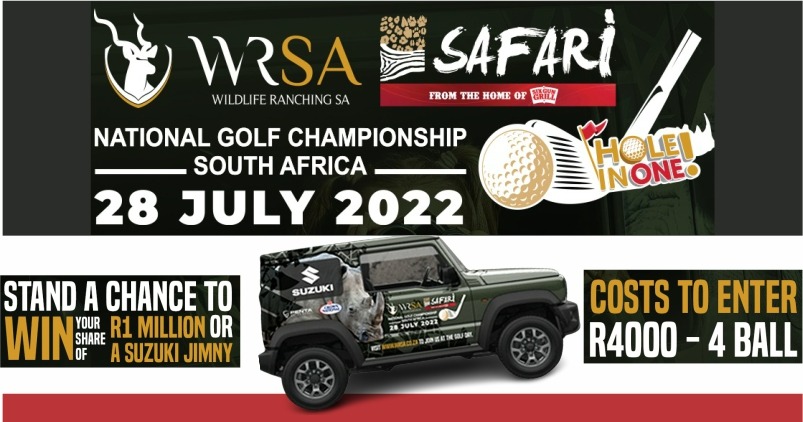 The WRSA Safari National Championships are well underway with loads of interest and support from the corporate industry, suppliers, friends, and colleagues. Currently eight golf courses throughout South Africa are participating.

The most popular course, Irene Country Club, is almost fully booked. We are still in need of green sponsorships and action prices and would appreciate any contributions from our members and suppliers. Remember to tune into Groot FM and Die Groot Ontbyt on 28 July to support our telethon where we will be pledging donations for WRSA and WRSA Foundation. For 4 ball entries follow this link.

Funds raised will be used to strengthen antipoaching activities on private land as well as communal owned properties with significant rhino numbers.

Rhinos are an indispensable part of maintaining the balance in the biosphere they inhabit. Protecting and conserving rhinos fulfils our mandate to protect and conserve the biodiversity of South Africa. White rhinos are selective grazers which feed on certain grass species that promotes biodiversity. Similarly, black rhinos eat many woody plants and trees which results in more grasses growing, which benefits other animals.

The rate of poaching is far above the sustainable growth rate of the rhino population. When poachers kill a young cow, they remove as many as 10 rhinos from the population-continuum as one rhino cow can have up to ten calves during her productive years.

Herein lies the problem, there is currently no government managed park that is safe from the unnatural predations of the poaching complex. The skewing of herd numbers means the population growth of the species is negatively affected, leading to a downward trend in population growth in addition to the loss of individual rhinos to poaching.

The comparatively lesser affected private ranches have been able to maintain an average annual growth of 14,4% from 1984 to 2021, significantly greater than the natural biologic growth rate of around 6%, and the IUCN/CITEC target of 5%. Currently, it is estimated that 65% of white rhino in South Africa are on private land.