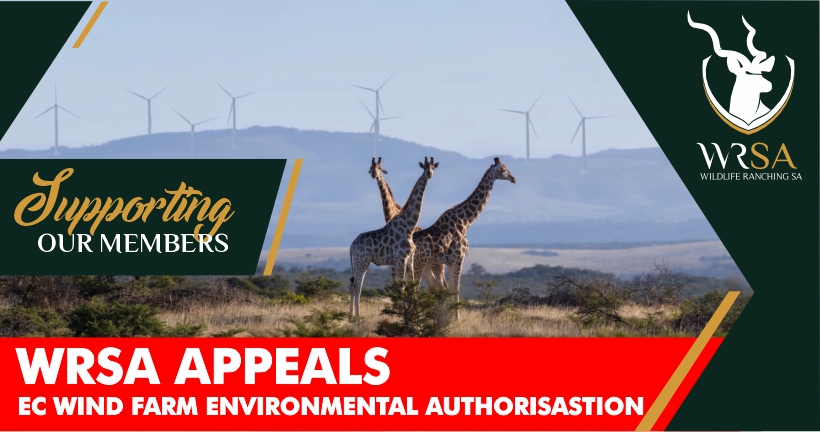 WRSA, as an organisation concerned with environmental health and its importance to biodiversity, is in no way opposed to progressive steps to develop green energy generation including wind farms. We do, however, have a serious concern where the placement of the proposed development will have a negative impact on the future operations and livelihood of member’s ranches in the vicinity of the development.

WRSA has submitted a statutory appeal against the decision of the Department in awarding environmental authorisations for the specific windfarm near Makhanda in the Eastern Cape. We are of the view that the matter is of great concern to game ranchers in the area but also all other game ranchers might potentially in the future be affected by these types of developments. We have focussed our appeal on the procedural defects in the public participation and preparation of the environmental application.

The appeal is putting forth several arguments against the EA, among them:

WRSA has also supported a more substantive and scientific approach employed by the Indalo Private Game Reserve Association who are also now submitting their own appeal against the decision. Copies of the WRSA procedural assault here.

Page load link
We use cookies to ensure that we give you the best experience on our website. If you continue to use this site we will assume that you are happy with it.OkPAIA ACT
Go to Top